I mentioned in my recent post on Sati that Queen Victoria outlawed the practice shortly before losing her own husband in December 1861. 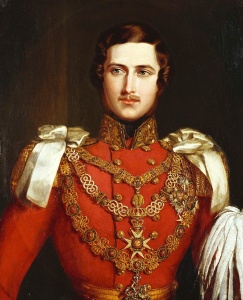 At the age of 42, Prince Albert passed away after a painful illness stretching more than two years. However, in an eerie prediction of things to come, Albert sensed his time was up in October of 1860. Whilst alone in a carriage drawn by four horses, the carriage was pulled suddenly into a parked wagon at full speed. Albert had to jump for his life and watch on as the carriage crashed killing at least one horse; he was severely distressed by the ordeal fearing that he was meant to die in the crash.

When Albert was diagnosed as sick, he resigned himself to the fact that he would never recover, though he still attended his kingdom until the last few weeks of his life. Despite Albert’s quick accepting of his imminent death, Victoria did not. Following his passing she was consumed by inconsolable grief and from here on was doomed to live out the rest of her life in black mourning attire. Victoria had become so dependent on her husband emotionally and professionally that she became useless in his absence.

A rarity for the period, Queen Victoria grieved for the rest of her days. It was atypical of the 19th Century for anyone to not overcome the loss of a loved one with a few years at most. Such an example of obsessive mourning led her to shun her children and become an icon for widowhood. Having not attended Albert’s funeral due to her levels of grief, the Queen retreated into 40 years of mourning.